Susan Morgan holds degrees in horticulture from the University of Tennessee, including her M.S. in public horticulture. Her thesis research evaluated the long term effects of a horticultural program for youth at risk at the Brooklyn Botanic Garden in New York, and was published in the Journal of Environmental Education. She presented her research at the 6th International Congress on Education in Botanic Gardens at the University of Oxford in England and the American Society for Horticultural Science annual conference in Las Vegas. Her professional garden experience includes Dallas Arboretum in Texas, Chicago Botanic Garden in Illinois, Biltmore Estate in North Carolina, and Cheekwood Botanical Garden and the Gaylord Opryland Hotel conservatories and grounds in Tennessee.

As senior horticulture manager overseeing the daily operations and maintenance of the gardens at the Dallas Arboretum in Texas, Susan was inspired to more closely connect people with the restorative benefits of plants and nature. She completed her horticultural therapy certificate from the Horticultural Therapy Institute (HTI) & Colorado State University and an international diploma in botanical garden education from the Royal Botanic Gardens, Kew, in England. She honed her therapeutic horticulture practice at the Chicago Botanic Garden and Dallas Arboretum.

Susan has delivered therapeutic horticulture, educational, and vocational programming in different settings for a variety of audiences, including adults with dementia, resettled refugees, individuals with developmental disabilities, young men incarcerated at a boot camp style jail, those facing illness and other life challenges, horticulture industry professionals, and the general public. As owner, horticulturist, and practitioner at The Horticultural Link, LLC, Susan engages and (re)connects people with plants and the natural world through her programs, horticultural goods, public speaking, consulting, writing, and photography. She is a recipient of the American Horticultural Therapy Association's Alice Burlingame Humanitarian Service Award and the Perennial Plant Association's Young Professional Award.

A former assistant gardening editor at HGTV/DIY Network (formerly Scripps Networks Interactive), Susan's writings and photography have been featured on the HGTV and DIY websites, as well as in the AHTA Magazine, The Senior Voice, and Lawn and Garden Retailer. (Take a look at her article about Celebrity Roses, featuring quotes from celebrities who have roses named after them.) Susan blogs about the people-plant connection, gardening topics, and TH activities at her award winning blog eatbreathegarden.com, as well as the Horticultural Therapy Institute. 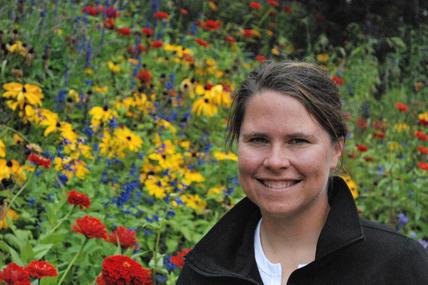 One might say that tending plants and the earth are in Susan's blood. With her horticulturist father, she regularly visited botanical gardens and out-of-the-way plant nurseries on family vacations. Family pictures were often centered around the blooming doublefile viburnum in their backyard or the Peter Rabbit statue during their annual trek to Kingwood Center, a public garden in Ohio. In fact, Susan started her horticultural career as a child model showing off the scale of a "giant" hosta in a photo prominently featured in her father's presentations.